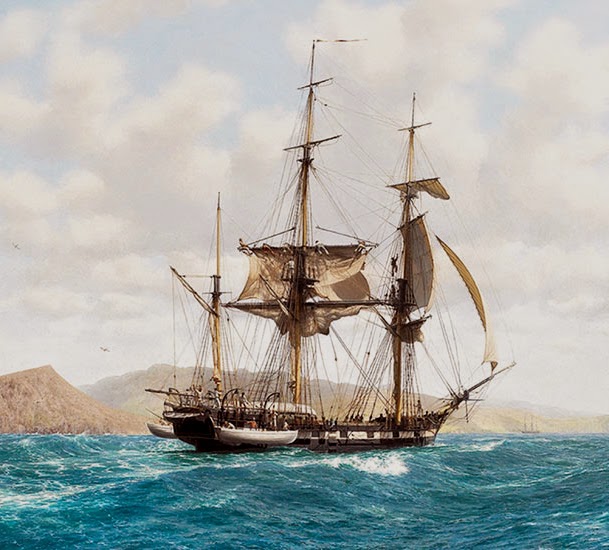 During the passage of HMS Beagle through the eastern Atlantic, Charles Darwin became intrigued by dust that accumulated on parts of the ship:

On the 16th of January (1833), when the Beagle was ten miles off the N.W. end of St. Jago [Santiago, Cape Verde Islands], some very fine dust was found adhering to the under side of the horizontal wind-vane at the mast-head; it appeared to have been filtered by the gauze from the air, as the ship lay inclined to the wind. The wind had been for twenty-four hours previously E.N.E., and hence, from the position of the ship, the dust probably came from the coast of Africa. The atmosphere was so hazy that the visible horizon was only one mile distant.. [1]

..Many scattered accounts have appeared concerning the dust which has fallen in considerable quantities on vessels on the African side of the Atlantic Ocean. It has appeared to me desirable to collect these accounts, more especially since Professor Ehrenberg’s remarkable discovery that the dust consists in considerable part of Infusoria and Phytolitharia [the remains of the coverings of single-celled organisms, the latter with siliceous coats].. [1]

..it is a very singular fact, that out of the many forms [of the coverings of single-celled organisms] known to Professor Ehrenberg as characteristic of Africa, and more especially of the Sahara and Senegambian regions, none were found in the dust. From these facts one might at first doubt whether the dust came from Africa; but considering that it has invariably fallen with the wind between N.E. and S.E., that is, directly from the coast of Africa; that the first commencement of the haze has been seen to come on with these winds; that coarser particles have first fallen; that the dust and hazy atmosphere is more common near the African coast than further in the Atlantic; and lastly, that the months during which  it falls coincide with those when the harmattan blows from the continent, and when it is known that clouds of dust and sand are raised by it, I think there can be no doubt that the dust which falls in the Atlantic does come from Africa. [1]

We know from satellite images that considerable amounts of dust are carried out far into the Atlantic, on to South America [2] and, with changes in the jet stream and other meteorological events, to many other parts of the Earth (see image below). It is intriguing to read in Darwin’s report that the dust contains the identifiable remains of “Infusoria and Phytolitharia”. The northern part of Africa, where these aquatic organisms originated, is now desert, but there must clearly have been water present in earlier times and, indeed, a lake covering 350,000 km2 existed in the region 6,000 years ago. [3] It is likely that the remains of cells that Darwin, and others, reported from the Atlantic were originally from this source and we now know that components of the dust include residues from many other algae and animals, including fish, and that these fall into the water, or are carried there by rains, and act as fertilisers. [3] 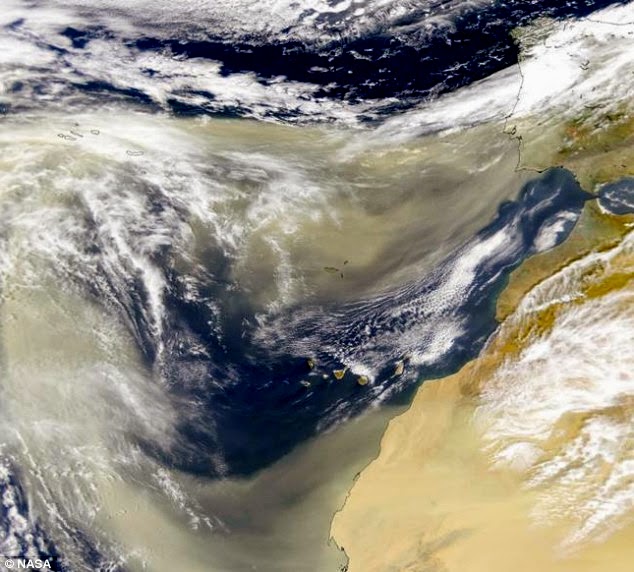 Anyone who gardens knows that fish bone meal is a good source of phosphorus for growing plants and it is thus likely to play a similar role when deposited into the oceans, or on to terrestrial landscapes. Recent research by Karen Hudson-Edwards and colleagues [3] has shown that the mineral residues of fish bones allow easier solution of phosphorus than many other bound organic residues that are present in the dust being blown from the Sahara. There is, of course, a finite amount of this material and, in time, it will form a smaller and smaller fraction of that eroded from the region, as the strata containing the organic remains begin to disappear.

Many people are familiar with the idea of fish, and other animals, falling from the sky, having been sucked up by waterspouts from surface waters, [4] but the rain-down of fossilised fish bone meal, and other mineralised plant and animal material, is less well-known. It has been, and continues to be, an important input of fertiliser to both aquatic and terrestrial communities.

[1] Charles Darwin (1846) An account of the Fine Dust which often falls on Vessels in the Atlantic Ocean. Quarterly Journal of the Geological Society 2: 26-30.