“All Nature is marvellous” - Aristotle, Pliny the Elder, and credulity 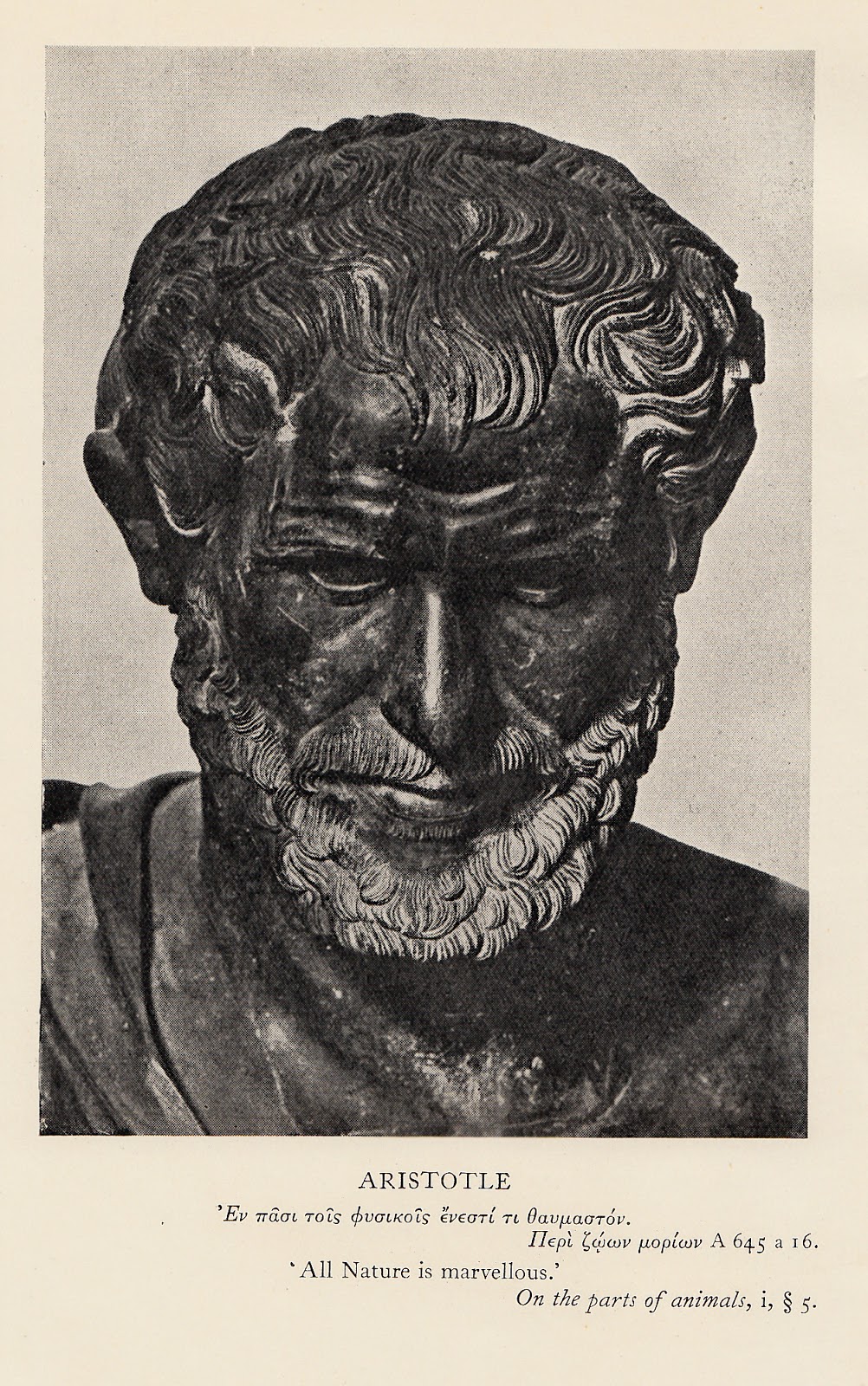 The quotation in the title of this post is a translation from Aristotle in On the Parts of Animals, written 350 years BCE. Together with a photograph of a portrait bust, it forms the Frontispiece for Charles Singer’s A Short History of Biology (see above) and Singer, an avid admirer, writes:

The surviving works of Aristotle place him as among the very greatest biologists of all time. He set himself to cover all human knowledge, and succeeded in this vast task in a way which no one has succeeded before or since. He was a deeply original thinker, and he had an unrivalled capacity for arranging his own and other people’s material. To these qualities he added first-class powers of observation and great shrewdness of judgement. No succeeding thinker has exercised so great an influence. [1]

We are left in no doubt as to Singer’s view of Aristotle, his qualities and his importance, but he regards Pliny the Elder, another well-known Natural Historian from antiquity, quite differently. Pliny was Roman and:

..a well-born gentleman, and an able and efficient civil servant. He was a man of immense industry with an enthusiasm for collection. He did not, however, collect natural history objects, but only information or rather misinformation about them. He put together a vast number of extracts from works concerning every aspect of Nature. These he embodied in his famous book on Natural History. Unfortunately, Pliny’s judgement was in no way comparable to his industry. He was excessively credulous. Thus his work became a repository of tales of wonder, of travellers’ and sailors’ yarns, and of superstitions of farmers and labourers. As such it is a very important source of information for the customs of antiquity, though as science, judged by the standards of his great predecessors, such as Aristotle.., it is simply laughable.
Despite the low quality of his material, Pliny’s work was widely read during the ages which followed. He was the main source of such little natural history as was studied for a thousand years after his time. Many common superstitions have thus passed into current belief from Pliny.
One idea which comes down to us direct from Pliny is very commonly encountered among ignorant people. It is the belief that every animal, plant and mineral has some use; that is to say, was formed for the benefit of man. [1]

This is harsh criticism, and Pliny does not benefit by comparison with Aristotle. However, it is easy to see that Natural History is very much as Singer describes it. [2] The work is truly encyclopaedic and does not confine itself to plants and animals, but also to many aspects of the physical World.

The idea of the usefulness of plants and animals to humans cannot be laid solely at Pliny’s door. In Genesis 1: 26-29 in The Holy Bible, we read: [3]

To me, this is as anthropocentric as the writings of Pliny and must have had a considerable effect on how Nature was regarded during the Dark Ages. It is interesting that Singer’s statement about anthropocentricity was made in 1931, at a time when the study of Biology was still strongly influenced by Natural History and it was recognised that having knowledge of plants and animals of all types was important. Since then, we have concentrated more and more on humans, or genetic analogues of our species.

In a wider context, humans threaten not only each other but, increasingly, the existence of other organisms and the environment. It can be argued that the widespread extinction of plants and animals arises from our belief that they are not important, unless they benefit us directly as crops, saleable commodities, or sources of useful chemicals. It is not the thought of Pliny, or of Jewish and Christian literature, that is driving this attitude, but our politico-economic systems. Singer’s ire is even more relevant now than it was eighty years ago and I wonder if we, like Pliny, are excessively credulous in consuming information conveyed to us about what is really important. It might be suggested that we should return to Aristotelian ideals, reduce our anthropocentricity, and re-examine the view that “All Nature is marvellous” before we become even more destructive. So how can this be achieved in an era of sound bites, reality TV, advertising, and other challenges to our credulity?