Our fascination with dinosaurs


Unlike the majority of scientific finds, descriptions of new dinosaurs are often reported widely by the World’s media, as they grip the imagination of readers and viewers. A recent example is the discovery of Dreadnoughtus schrani in Argentina, where about 45% of the skeleton was found. [1, 2] Individual bones were cleaned carefully and these allowed the reconstruction shown in the illustration below, with the bones recovered shown in white. The skeleton was then completed using assumptions based on a scholarly prediction of the size, and shape, of the missing parts. Dr Lacovara of Drexel University and his colleagues were delighted to have both a femur and a humerus, as measurements taken from these two bones allow a reasonably accurate estimate of the mass of the living Dreadnoughtus to be made - at nearly 60,000 kg, [3] equivalent to more than 10 African elephants. [2] 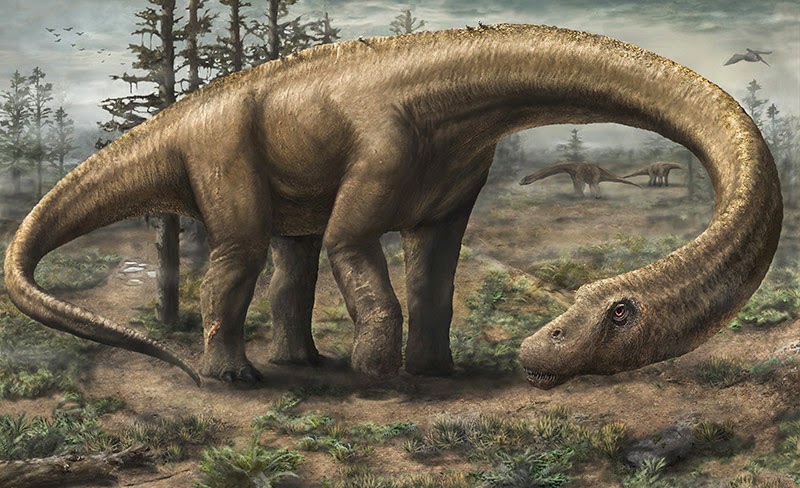 Both a BBC article, [1] and the one by Drexel University, [2] use the same artist’s impression of a living Dreadnoughtus, although the BBC piece blanks out the background, something that gives context and scale, as does comparison with the size of contemporary humans (see the illustration above). But how accurate is the image of the reconstructed dinosaur to the living form? Fortunately, there are sufficient bones from this specimen to assess the insertion of muscles and thus the outline of some parts of the animal, based on very close examination of bone surfaces by experts. [3] However, while almost all the tail bones were recovered, there is little of the neck and even less of the head, so what is the basis for their appearance in the artist's impression?
There is a problem in making reconstructions of whole animals from skeletal fragments and I’m sure that many dinosaurs are painted with far less evidence of structure than is available for Dreadnoughtus. However, it is the illustrations that grab the attention, although the size of mounted skeletons, or casts, in museums certainly give a sense of the huge size of some of these reptiles. Dinosaurs have been afforded another level of presentational skill in being used in animatronics and computer simulations [4,5] that often feature colour, sounds and even behaviour and may be based on a little too much imagination. Nevertheless, these images are widely held to be accurate by enthusiastic onlookers.

Our fascination with dinosaurs goes back to the time of the popularisation of fossil hunting and of Natural History in the Nineteenth Century. Among the more famous exhibits of that time are the life-size models of dinosaurs commissioned for the move of the Great Exhibition to the newly-constructed Crystal Palace in 1854. These models remain in the grounds of the demolished Palace (see below) and are still visited by families, whose children delight in their scary nature, despite their obvious lack of life.

In the Nineteenth Century, we knew that dinosaurs existed millions of years before the present and this widely accepted interpretation provided a challenge to those who believed in the literal account of Creation in The Bible. Faced with this conflict, Philip Henry Gosse, wrote Omphalos, [6] in which he advanced a theory that suggested that fossils of such age did not compromise the belief that everything was created over six days, just a few thousand years ago. In the first section of his book, Gosse describes several fossil discoveries accurately and accepts that they were present during different geological time periods, as advanced by Lyell, amongst others. The text is illustrated by artist’s impressions of the living animals in their natural habitats, several in the form of signed woodcuts by Gosse himself and two of these are shown below. 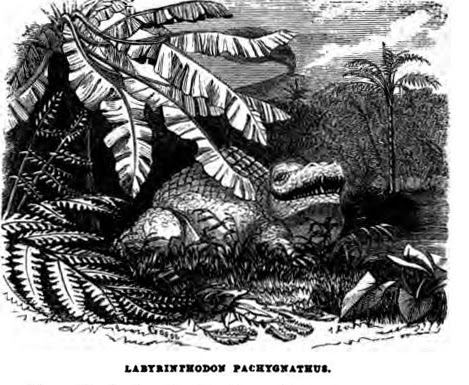 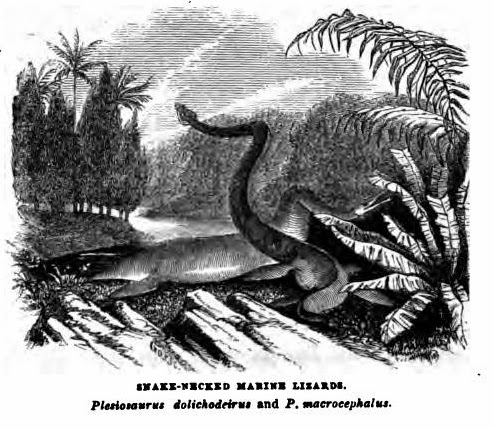 As a brilliant Natural Historian, Gosse was fascinated by the biology of these creatures:

..the most characteristic animals [of the Lias] were great marine Reptiles, of strange and uncouth forms, to which the present world presents us no known analogy. One of these was the Icthyosaurus, which closely resembled a porpoise in form, but thirty or forty feet in length, with a vertical fish-like tail, and two pairs of paddles; a mouth set with stout crocodilian teeth, and enormous eyes. Another form was that of the Plesiosaurus, scarcely less in size than its fellow, which in the outline of its body it resembled: it was distinguished, however, by an extraordinary length of neck, slender and swan-like.. [6]

However, his theory concluded that they had only had the appearance of being alive as everything was created by God at that huge event a few thousand years ago and this included the Earth’s strata and the fossils that they contain. It is, of course, a rather silly theory produced by someone with complete faith in the words of The Bible, yet accepting the logic of geological time. There was no doubting his enthusiasm for dinosaurs, however, even if he believed that they had never existed. Interestingly, in the context of the quote given above, Gosse put forward his view that sightings of “sea serpents” may be explained by the continued existence of reptiles like ichthyosaurs and plesiosaurs. [7]

What is it about dinosaurs that make them more fascinating to us than other fossil animals? In part, it relates to their size, although many small dinosaurs do not have the glamour, and almost mythological status, of larger forms. It is also because we really want to see living forms, rather than impressions of various kinds. Some hope that, like the sea serpents sighted in the Nineteenth Century, aquatic dinosaurs continue to exist, even though the chances are miniscule. In the United Kingdom, we are familiar with the “monster” that is believed to inhabit Loch Ness, but studies using sonar, and other techniques, have, predictably, drawn a blank. Wouldn’t it be fun if we did find a living dinosaur, though?