Coming Up for Air


I first read George Orwell’s Coming Up for Air when still at school in Torquay and the book made a strong impression on me. It was the effect of the vivid and gritty description of George Bowling’s life and times just before the Second World War, his feeling of being trapped and needing to escape, and Orwell’s fascination for Nature that impressed me. I could certainly identify with the latter, if not the other two aspects, and this section in Coming Up for Air must have had a special appeal:


“...Why don’t people, instead of the idiocies they do spend their time on, just walk around looking at things? That pool, for instance - all the stuff that’s in it. Newts, water-snails, water-beetles, caddis-flies, leeches, and God know how many other things that you can only see with a microscope. The mystery of their lives, down there under water. You could spend a lifetime watching them, ten lifetimes, and still you wouldn’t have got to the end of that pool. And all the while the sort of feeling of wonder, the peculiar flame inside you. It’s the only thing worth having, but we don’t want it.”


I was always fascinated with looking at marine and freshwater creatures - in their natural habitat, in aquarium tanks, and under the microscope - the same fascinations that had inspired the wonderful Philip Henry Gosse, also a resident of Torbay, a hundred years before. However, it was much later that the work of Gosse was to play a role in my life.


Dominic Cavendish describes Orwell’s attitude to Nature, as expressed in Coming Up for Air, in an essay published by Orwell Society [1]:


“There should be no disbelieving the rapture that Bowling feels in the presence of nature – rapture recalled as a child, and rapture re-experienced as an adult. It’s a rapture we know Orwell experienced in his own childhood, and the book is imbued with the writer’s fondness for flora and fauna – and fishing. “


When George Bowling “escaped” from his day-to-day life to visit his old home town of Lower Binfield after twenty years, it was the changes in buildings, landscape and people that fuelled his disappointment. That, and the recognition that the carp pond that he had discovered as a boy, but never fished, and which he was so keen to fish now, had been transformed into a rubbish dump. The whole experience was disillusioning and yet:


“The beech trees seemed just the same. Lord, how they were the same! I backed the car onto a bit of grass beside the road, under a fall of chalk, and got out and walked. Just the same. The same stillness, the same great beds of rustling leaves that seem to go on from year to year without rotting. Not a creature stirring except the small birds in the tree tops which you couldn’t see. It wasn’t easy to believe that that great noisy mess of a town was barely three miles away.”


A few years ago, I felt a need to go back to Torbay and my first reactions on visiting after two decades were superficially similar to those of George Bowling on returning to Lower Binfield. There were indeed many changes to the towns in the Bay and these were not for the better. Everything seemed much tackier than I remembered it, although my memories must be coloured by both time and nostalgia. However, a walk along the coast, using the same footpaths I had used as a boy, brought me to an unchanged landscape of coves, headlands and woods. There was Saltern Cove (see below), where I spent several days in the 1960s revising inorganic chemistry, while sitting in the warm sun. I was only kidding myself that I was revising, for my mind was always venturing off into some dream, and the biology of the rock pools, and the interesting geology of the Cove, were much too great a diversion. Now, there is no chemistry to revise, no examinations to pass, and certainly no need for any escape. My Coming Up for Air is a wonderfully positive experience and one which I look forward to each year, if at all possible. It gives me a sense of the continuity of the coastal landscape and of the plants and animals which are found there. A feeling that the Nature of my childhood, so important to me then, is alive and well, despite all the adverse changes nearby. Unfortunately, I don’t have Orwell’s writing skills, so I cannot put it better than that. 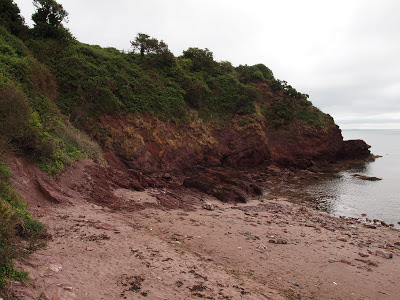