Most of us have been through the ritual of being taken to visit relatives when we were young. My earliest memories include those of going to the homes of various aunts (actually great aunts) in the early 1950s and then wondering how long we were going to stay. Their drawing rooms were dark, with lots of lace, china ornaments, aspidistras in large planters, sentimental pictures, and a characteristic smell. It wasn’t unpleasant, just different, and I was conscious of having to be well behaved (we were made very “presentable” for these visits), saying a few things and then tuning out of the conversation, about which I understood little.

In contrast to these routine visits, going to see one of the aunts was always a pleasure. Aunt Ede loved cats (see the picture below, taken in the early 1930s), had married Uncle Os when she was 66 (and I was 3), and was very happy with her companions. Aunt Ede used to accompany us on Nature walks in the surrounding countryside, while Uncle Os was busy in his workshop, in an atmosphere of oil vapour and pipe smoke. We would also see her in the town, always carrying her round wicker basket containing fish bought at the fishmongers and which was destined to be supper for the cats. Aunt Ede lived in a house named Malvernia (her family came originally from Malvern) and when we called she would always thrust money into our hands and make tea and provide cakes. A wonderful lady and, like me, a bit of an independent-minded sort. She never really recovered after Uncle Os died in 1965, but her joy at seeing me when I popped around to Malvernia during University vacations was touching.

The last time I saw Aunt Ede was in a nursing home in 1972 and she asked repeatedly about the cats and whether they were being looked after. I suspect that, by then, the cats had been removed and it was a sad way to say goodbye to a remarkable lady, although I didn’t know that it was to be a final goodbye. I still remember Aunt Ede with fondness. She loved Nature. 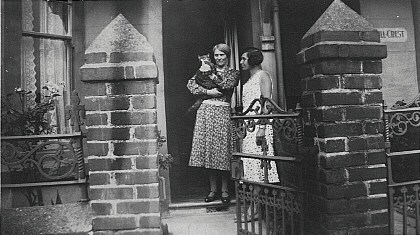 The aunts seemed very old indeed to me when I was a boy, but I had only a few years of my own to compare against their many decades. For me, the future was full of unknowns, whereas the aunts knew what they had achieved and also knew that they did not have many years to live. Perhaps that’s why their conversation reverted to chat about other family members and that excluded me as I had no idea who was related to whom, and no interest in their lives. As far as I know, none of the aunts extended this interest into preparing a family tree, but doing so has become a popular hobby now that we have such easy access to data that help us in tracing ancestry. Genealogy is mostly an occupation for older people, as it provides a way of recording one’s place in history, although with the date of death still to be inserted, of course.

Most family trees go back two or three generations (those of Royal Families substantially longer) and the further we go back the less we know about the way of life of our ancestors. Is it possible to get a feeling for the lives of those, say, four or five generations back? We can get some information by visiting museums or preserved buildings, but that seems impersonal and contrived and the way of life of the occupants of the rooms displayed can only be imagined. If that is true of the recent past, how can we get a feel for life thousands of years ago? Probably not by looking at artefacts, montages or re-creations.

If that is a difficult question to answer, what about our understanding of geological time scales, where 10 million years is recent and where the origins of the Earth go back billions of years? These are just numbers to us and mean little, except as reminders that humans are very recent indeed on such time scales and our knowledge of the Universe, including our World, has been acquired largely within a handful of generations. It is an astonishing achievement and provides us with the best explanation of what we observe to have happened over unimaginable timescales and distances (with apologies to those who believe it was all created 8000 years ago). It doesn’t seem feasible that such a very recent species has been able, in a few hundred years, to explain so many things, just by using our Earth-bound mathematics, physics, chemistry and biology. What if we are wrong in our assumptions and there is a different, more fundamental basis for understanding time and space that awaits discovery? Will we then be able to gain a real sense of time?