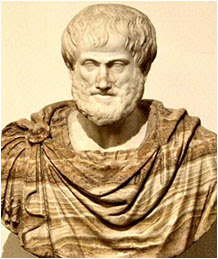 I knew very little about Aristotle until my first year as an undergraduate. My main subject at University was Zoology but I also took courses in Psychology, one of which was a whizz through European philosophy. As I wasn't very bright, I found much of moral philosophy tough going, and still find it difficult to summon up the levels of concentration needed to work out the arguments by the various notables in that field. Natural philosophy was different and I was absorbed by the ideas of Democritus, Aristotle, Galen, Harvey and the rest. I felt then, and do now, that learning about the contributions of leading historical figures in the field should be compulsory for all students in the Biological Sciences. Perhaps this isn't taught because many of their ideas have turned out to be inaccurate? If that is the case, it only adds to the necessity of studying the History of Biology as it helps us to question the apparent certainties that form the basis of our current thinking.

Of all the people in our rapid tour of natural philosophy, it was Aristotle who had the greatest appeal for me (although Democritus ran him a close second). Why? Well the simplest answer is that Aristotle was a Natural Historian and I identified with that, as I loved looking at organisms of all kinds in their natural environment, whether directly or by using telescopes, microscopes and other aids. I had many guides to help me identify what I saw and know where they fitted within the spectrum of living things, but Aristotle had to work out a system of classification and a means of locating different organisms within it. His many careful observations enabled him to describe what he saw and then develop a classification - Scala Naturae - which has been summarised as a diagram by Charles Singer in his classic A Short History of Biology: 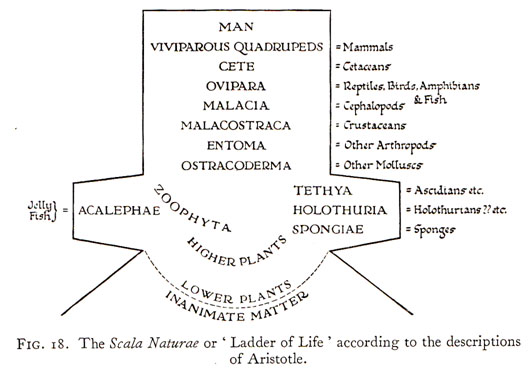 Singer gives modern terms in gothic script alongside the names derived from Aristotle’s writings and a progression is evident in the Ladder from inanimate matter through to Man (and Woman). Aristotle characterised all living organisms as having vegetative psyche (the power of growth and reproduction); with animals having animal psyche (allowing sensitivity and the ability to move in response to stimuli); and humans having a rational psyche (that permitted reasoning). The whole spectrum of living things had different amounts of the psyches. Singer states: “When we come to consider the inferences and theories that he deduces from his observations, we must feel that we are in the presence not only of an eminent naturalist but of a supremely great intellect”. Even armed with my superficial knowledge of Aristotle, I must agree strongly with this view and the Ladder of Life is an extraordinary example of his achievements. There were many others.

A further comment on Aristotle by Singer is worth quoting: “It cannot be said that he ever definitely attained to the ‘evolutionary’ point of view. But it is evident that he was moving in that direction, and perhaps if he had lived another ten years he might have reached it.” That is an extraordinary statement, given that ideas on evolution surfaced over 1800 years later, being well-known before Darwin showed that natural selection provided the mechanism for the process. On the Origin of Species, published in 1859, had a profound effect and one can only speculate on what might have happened had Aristotle come up with a similar idea (a very remote possibility, even for that genius).
Posted by Roger at 09:53