Rotifers, Henry Gosse and me 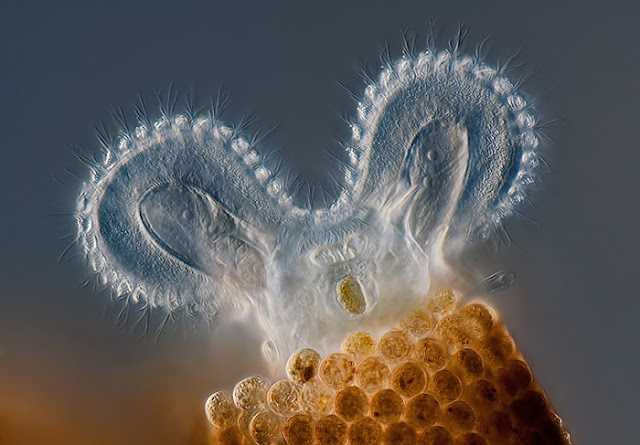 This image by Charles Krebs of Floscularia ringens was posted yesterday on the “Walking with Gosse” Facebook page by Dr Susan England of Clio Publishing. It is of a rotifer that lives in fresh water and builds a tube that acts as protection, support and a means of attachment. Looking closely at the image we can see the groups of cilia which it uses to produce a feeding current. The tube is composed of balls largely of detritus, which are stuck together and the balls maintain their integrity for weeks, Floscularia extending the tube to take it further out into the water as the individual rotifer grows. The whole is approximately 1 mm in length and we see only a small portion here.

Henry Gosse, the great Natural Historian and illustrator, was fascinated by rotifers and assisted C.T.Hudson in a two-volume monograph on the animals. Despite Hudson’s protests, Gosse insisted on his attribution as assistant and this was typical of the man. The two enthusiasts were really co-authors and Gosse contributed much of his own detailed research to the volumes. In looking at rotifers, as with other living creatures, Henry Gosse saw evidence of the power of God and His Creation and it filled him with a sense of wonder.

As an evolutionist, I have several points to consider:

Why are the cilia used for feeding arranged in bundles?

Rotifers have many cells but had single-celled ancestors which used cilia for locomotion and feeding. Through evolution, cilia of some organisms became more complex and the bundles seen in Floscularia may promote increased feeding efficiency. The pattern of bundles seems very similar in form across the corona (the transparent lobes), so what caused their development in the first place? Did all the bundles appear simultaneously?

Several groups of rotifers build tubes and the tube of Floscularia is unusual in being made up of balls, primarily of detritus. The photograph shows the location of the “ball-forming device” in the cuticle of the rotifer and its constituent tiny particles will be collected readily from the water by the feeding current. We often ignore the presence of organic particles in water, yet they are found in vast numbers and have many important roles in the functioning of aquatic systems. Once a ball is formed, and compressed to a certain size, the rotifer can then locate it on the tube and having a tube with a wall of spherical balls is a very efficient use of materials. How did the “ball-forming device” and tube-building evolve?

As mentioned, rotifers collect small particles of detritus and other organic matter. Detritus results from the breakdown of the bodies of living things and also consists of material that passes from living things as waste products or exudates. There will also be many different kinds of microorganisms (bacteria, etc.) that are attached to the fragments of detritus and are important in breaking them down into smaller and smaller pieces. To attach, microorganisms exude polymers and these are “Nature’s glue”, often becoming free from the microbes which produce them. It is these polymers which keep the balls intact as they are difficult to decompose and there are many "sticky" contact points when the ball is compressed. The exudates are in the form of minute fibrils and the rotifer could not make balls without the previous evolution of exudates by bacteria.

Do I have any idea how Floscularia developed all these modifications? – No. Do I believe that they evolved by changes in genes occurring over huge numbers of generations? – Yes. Is a God responsible? – I don’t know, but do not think so. Evolution generates such a sense of wonder. I’m right with Henry Gosse in having that feeling when looking at living organisms, but we would not agree on the reasons why we felt that way.
Posted by Roger at 04:27